Just ask Jamal Hinton and Wanda Dench. The Tempe teen and Mesa grandmother were brought together last year by an accidental Thanksgiving invitation text message, and they reunited this week to have a second helping and cement a tradition.

“It was really nice having everybody here,” Dench told The Arizona Republic on Saturday. “We got to laugh about last year and reminisce about how it all blew up on our phone and how I had to change my number. We had a laugh and a good time.”

Twitter Implodes Over Billie Eilish, Age 17, Not Knowing Who Van Halen Is

Need a rundown of the inadvertent dinner invite seen ’round the world?

Dench intended to send the Nov. 15, 2016, group text message to a few family members, inviting them over for Thanksgiving dinner. But one grandson had changed his number six months earlier and failed to mention it to Grandma.

It instead wound up going to Hinton, then a 17-year-old high schooler.

Screenshots of the conversation wound up on Twitter, where they were shared hundreds of thousands of times — a perfectly timed moment of levity, when the country was fiercely divided over the election and rocked by a series of protests and shootings.

As the posts took life, the Internet had a very reasonable question about a very real conundrum: Do you honor the accidental invitation and have the stranger over for dinner?

The answer was yes for Dench. Because that’s what grandmas do.

Somebody grandma is coming in clutch this year!! Ayee!!! pic.twitter.com/laXmX6rotA

It was never really a question. Dench and her family prepared the meal — and opened their doors to reporters, too — and welcomed Hinton into their home on Thanksgiving.

The only awkward moment? When Hinton confessed he forgot to bring the pumpkin pie.

“We’ve got plenty,” Dench assured him last year before settling down for dinner. 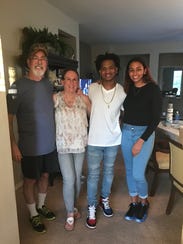 Lonnie (from left) and Wanda Dench and Jamal Hinton and his girlfriend, Mikaela Grubbs, gathered at the Denches home for Thanksgiving on Nov. 23, 2017. (Photo: Wanda Dench/Special for The Republic)

Fast-forward to this year, and Hinton said he and Dench have chatted about once a week. She usually asks about his future plans — law school and becoming a sports agent. He looks forward to hearing about how the rest of the family is doing.

He thinks of her in some ways like an adopted grandmother. She made 2017’s dinner invitation official about a month ago, and they locked in the time a couple weeks ago, sans the side of social-media hubbub.

“For him to continue with the relationship, I’m just really pleasantly surprised,” Dench said. “We’re more of extended family and, best of all, friends.”

This year’s dinner was more subdued, which was a welcome change. Dench met Hinton’s girlfriend, Mikaela Grubbs, and the family — extended and otherwise — spent the afternoon together. That is, before Hinton left to go to his other grandmother’s house.

“The world is becoming a better place than it used to be,” Hinton said Saturday. “I’m loving it. I love that you don’t have to know someone or know their background to be nice to them.”

Hinton redeemed himself this year, too.

He brought the pumpkin pie.

Under fire from all sides, Esper’s next move may dictate his future

New York (US).  Trading Your Own Way quoting Robinhood reports of 5 Penny stock are ready to take off in...